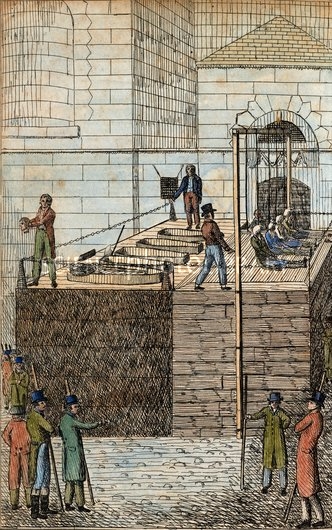 I have struggled for days to think what to start my blog with and then the fair maiden of fortune presented me with an execution that combined my interests of comedy and capital punishment and even coincided with the start date of my PhD.  I couldn’t ignore her suggestion.

On 1st May 1820, 5 men appeared on the scaffold at Newgate Prison, all charged with High Treason, for conspiring to murder the British cabinet in its entirety and Prime Minister Lord Liverpool (a plot that was to become known as The Cato Street Conspiracy). As Republican conspiracies go, it was ambitious to say the least.

The men, Arthur Thistlewood, James Ings, James Brunt, William Davidson and Richard Tidd¹ had been dragged to the place of execution on a hurdle and now awaited their grim fate in front of a multitude of spectators (100,000 by some accounts), many of whom had paid for the privilege of a better view.² As the moment of their demise approached Ings ‘roared out three distinct cheers in a ‘voice of the most frightful and discordant hoarseness’ and in a brilliantly British response, his fellow conspirator Tidd said ‘ There is no use in all this noise. We can die without making a noise’.³ Sadly, Tidd couldn’t have been further from the truth. Once the executioner dropped the trapdoor the full ‘agonies of death were exhibited to the view of the crowd in their most terrific form’, Brunt is said to have kicked and choked for a full five minutes until the executioner pulled at his legs.

I know, I know, Where’s the comedy here? I hear you cry.

Well, there’s an old saying that comedy works in threes, sometimes known as the ‘rule of three’ or the ‘comic triple’. It is based on the assumption that ‘a series of three often creates a progression in which the tension is created, built up, and finally released.’ The release being the laughter from the gag or punchline. I will take E.B White’s famous advice at this point and offer no further explanation of comedy as

Analysing humour is like dissecting a frog. Few people are interested and the frog dies of it.

Following the hanging, as was customary in executions for treasonable offences, the heads of the deceased were cut from their bodies and presented to the crowd, alongside the Sheriff declaiming “this is the head of a traitor.” This case was no exception.

The crowd was hushed by the brutal spectacle, no mean feat given that the multitude was so large that part of a railing at St Sepulchre’s church collapsed, resulting in many being badly injured – a not uncommon event at English executions in this period. Horrified at the sight of the first head, not least because by all accounts it was ‘hacked off with brutal clumsiness’*, the crowd then appear to be slightly less cowed at the second. By the time the third head was presented, according to Thackery, the assistant accidentally dropped it – possibly due to the excess of blood – and this was met with a shout from the crowd of

A cracking heckle if ever there was one and by all accounts it had the crowd in fits of laughter, or to use the parlance of the day, behaving in the most unbecoming fashion, a response that is widely thought to have been a big turning point in the reformers campaign to abolish the grisly sentence of decapitation.

So, perhaps the conspirators had the last laugh, although I fear not.

¹ Several other co-conspirators had escaped execution by turning evidence against their fellow plotters.

Tim Key’s – Suspended Sentence: Non execution related, but a brilliant radio documentary about a poet and comedians personal struggle to create a great opening line for a book. His comic struggle made me feel less self-conscious about how many different ideas I went through for this first blog.