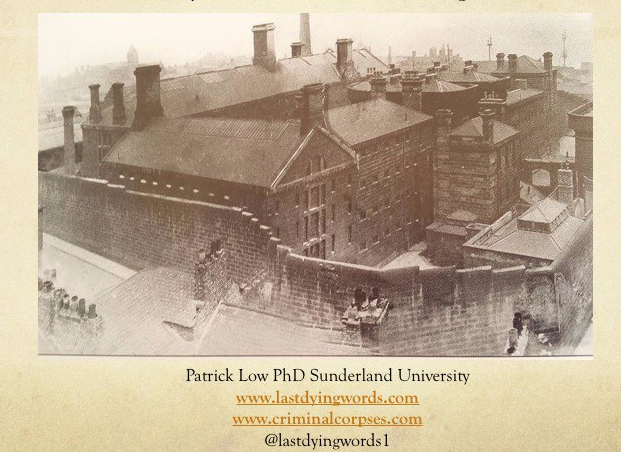 This is a paper I gave as part of a panel at the fantastic Lives, Trials and Executions conference at Liverpool John Moores University. The conference took place in May this year and my paper was part of a three paper panel on the last public execution in Newcastle, that of George Vass in 1863. I have included an audio recording that I made on my phone and the text of the talk is below (scripted dad jokes and all).

Having met the young George Vass and heard about his terrible crime and resulting trial, it is left to me to give him the ultimate send off and to launch him into eternity.

In this paper, I want to suggest that his execution is a moment worthy of study as its presentation and staging was unique in Newcastle and indeed the wider North East region. In as much, it gives us helpful insights into the changing presentation of punishment and its remarkably late adoption in Newcastle compared to other parts of the country.

This paper will use Vass’ execution and the few leading up to it to question the traditional narrative of the removal of public punishment being the result of an increasing ‘civilisation’, in which a growing abhorrence towards public spectacles led to their eventual removal from public site. In the case of execution in 1868. Instead, it will seek to show that the changes adopted in execution practice in the North East in this period were as much about regaining control and restoring authority over a spectacle that had become increasingly chaotic and a crowd that weren’t behaving as required. I will also argue that the late adoption of this method of execution in Newcastle, particularly when compared with London, was in large part owing to the limited incidence of capital punishment in the region. A factor that meant that an allowance for a site of execution was not made in the provision of Newcastle’s new gaol built in the 1820’s.

First though, a bit of context.

In his work on the crowd at c17th and 18th executions, Laqueur asserted that the relevant authorities for administering hangings showed a “perverse lack of interest” in their solemnity and this permeated all areas of their presentation, ultimately making them “unpromising vehicles for the ceremonial display of power.”[1]

Perhaps chief amongst these failings was their “unprepossessing” locations, places as such that provided an unhelpful background for conjuring up the awesome might of the state. [2]  Even the Tyburn gallows, the epicentre of English execution, were positioned at the “exterior of a barnyard.”[3] The same could be said of executions in the North East.

Executions in Newcastle up until 1844 were held on the Town Moor, a large expanse of common land more commonly associated with travelling fairs and race days.

In fact, it is still the site of Europe’s largest travelling fair, the Hoppings. A place where one can gain experiential learning of an execution by boarding the Airmach 5 and being dramatically suspended in front of a baying mob.

Similarly in Durham up until the early c19th, Dryburn, another site of unremarkable open land, was the regular site of execution

The first notable relocation of the execution spectacle in this period was in London.

Execution moved from Tyburn, modern day Marble Arch, to the exterior of Newgate prison in 1783. In York, a similar transferral was made in 1801.

Reporting on the movement of the gallows to outside of York Castle, the York Herald stated.

“Thus will be removed from one of the principal Roads leading to the city, that disagreeable nuisance, the Gallows; It is a truly wise and salutary measure.”[4]

Similarly, a transition was made in Durham in 1816 from the open land of Dryburn, North of the city, to the centrally located Crown Court that was situated at the back of the newly built prison.

After 1816 Prisoners would be walked through the following windows onto a raised gallows, the supporting plugs of which are still visible today.

This change at once removed both the element of public procession, so characteristic of earlier executions, and put the prisoner out of direct reach of the crowd. In many ways the executions that took place at Durham had a precedent in the executions at Dam Palace in Amsterdam.

However, in the same year that Durham underwent a fundamental change in its execution practice, James O Neil was being processed through the centre of Newcastle on the back of a cart, streets lined with thousands of people, to meet his eventual end on the Town Moor. Indeed, it wasn’t until 1850, some 70 years after the transfer in London that Newcastle saw its first execution outside a prison.

So why was this and what motivated the change?

This paper will suggest that the lateness of the change was motivated a by the combination of a lack of a suitable prison for the relocation, a low incidence of capital punishment and a pervading fear of the crowd.

Between 1800 and the end of public hanging in 1868 only 5 people were executed in Newcastle, less than one a decade. In other words, it was not a pressing administrative issue. Testament to this can be seen in the provision made for a new gaol in Newcastle in the 1820’s. It is not clear that provision was initially made for undertaking executions there. Commissioned in 1823 the new gaol was to replace the ageing Newgate prison. 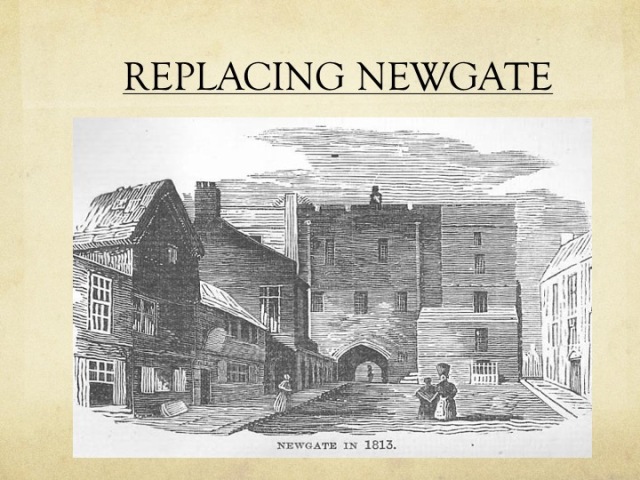 After much deliberation the site of Carliol Croft was chosen, the Croft by the end of the c18th was ‘the largest open space remaining within the town walls.”[5]

The works took 6 years and cost an estimated £35,000. The location of the Croft was a controversial one and the concerns around it pay tribute to the authorities fear of the crowd. A letter appeared in the Newcastle Courant in 1822, signed by ‘an inhabitant’ dismissing sites like Carliol Croft and instead arguing that it should be as close to where the prisoners were held as possible, for fear that the public would try and rescue a criminal from the gallows. Warning the reader that the days of radicalism with “marshalled mobs in their thousands” were ever present and therefore,

“the public mind need only be possessed with a wrong and mischievous impulse, to rescue, in spite of all opposition, a favourite leader”[6]

In spite of these fears, Carliol Croft was the chosen site and the new gaol structure was the work of Newcastle’s most prolific architect, John Dobson.

However the original plans show no specific provision for execution. This became apparent in 1829 when Jane Jamieson was sentenced to be hung for the murder of her mother (having run her through with a poker – a very common crime in these parts!). Despite the prison being in place and widely lauded, the prison was never mooted as a sight for the hanging.

Instead, Jamieson’s hanging had all the hallmarks of a fully public execution. She was collected from the prison and processed on an open cart through the principal streets of the town, a procession that covered roughly one mile and took just under 1 hour. Various reports noted that the procession was “accompanied by vast crowds of people all the way to the Town Moor.”[7]

Indeed, a surviving diary entry by apprentice surgeon, Thomas Giordanni Wright, noted how from his city centre lodgings the spectacle was almost unavoidable. Despite that, he chose not to join in as he knew Jamieson was to be dissected and so wrote that he would “most likely partake of the benefits accruing therefrom.” Not like a scientist to be so cold!

Once on the Town Moor Jamieson was hung off the back of the cart in front of an estimated 20,000 people, over half of whom were women if reports are to be believed. In essence, Jamieson’s execution was a scene largely unchanged from the c17th…..

PART 2 TO FOLLOW NEXT WEEK….FOOTNOTES BELOW (OR SKIP THEM FOR THE DISTRACTIONS COLUMN).

[7] An account of the trial and execution of Jane Jameson

One of the more eccentric follies of my youth was an unhealthily keen interest in politics (not quite William Hague at the 1977 Conservative Party conference, but not far off). At the age of 15, I approached my local MP (Mark Prisk – Conservative – I know most people will be thinking ‘a Tory in Newcastle!’, don’t worry hell hasn’t frozen over yet – I grew up in Hertfordshire) for work experience and ended up doing a month at the House of Commons. It was a fascinating time, but ultimately put me off the job for life. For all the grand intentions of MPs, I realised that 90% of their life is sorting disputes between warring neighbours or getting parking restrictions enforced. Think The Thick of It/In The Loop – both two of my favourite comedies of all time. Whilst my nascent desire to be a representative of the people has changed my interest in politics has always remained and so I have been fascinated by Peter Hennessey’s in depth ‘Reflections’ interviews with former politicians on Radio 4. Of particular interest was Michael Howard’s as he was the leader of the Conservatives when I worked there. In his interview, he talks about how the case of the Birmingham Six led him to came to change his mind on the death penalty – A fascinating listen. Whilst I’m on the subject one thing that always stuck with me during my time there was meeting Billy Bragg. He was at a House of Lords reform meeting and he made a beeline for me to say how good it was to see someone young and engaged in politics – a heartfelt gesture by a funny and warm man…Here’s to your New England.

I suffer from migraines and more occasionally (thank god) Migraine Associated Vertigo (MAV) sometimes, more cooly, known as Labyrinthitis. One of the major downsides is that it makes working at screens hard and any television or fast moving images can cause my head to trigger. Given this, my latest trip to the cinema to see Orson Welles’ F is for Fake was not the best decision I have ever made. It is a visual melee of fast edits, optical illusions and rapidly shifting images and, as great as the premise is, I found myself, sunglasses on indoors, thinking my head would explode. A fascinating watch….but perhaps one for when the migraine has passed. For anyone interested in the film there is a good Quietus Article here.