Up the close and down the stair,

In the house with Burke and Hare.

Burke’s the butcher, Hare’s the thief

Knox, the man who buys the beef.

Children’s Rhyme – courtesy of  The University of Edinburgh

It seems I’m everywhere but Newcastle these days! After travelling down to Leicester a fortnight or so ago (I’ve since been back), I found myself in Edinburgh last week for the biennial British Crime Historians Symposium.

I have a real soft spot for Edinburgh as I lived there after I left University (Sheffield if you’re asking) and fell in love with the place. So, I was very much looking forward to revisiting. I am very happy to report that despite the odd new building and the much derided new tram it was exactly how I remembered it. It even had the same imposing rain and heavy grey skies! It was as if I’d never left.

One of the great things about conferences is that you get to hear things you would never normally come across in your everyday studies. The breadth of knowledge and work being done is remarkable. Even better for me I met two lovely scholars who were presenting a paper on the execution of George Vass in Newcastle, 1863 (he has featured several times on this blog). I can’t tell you how rare it is to find anyone else talking about the North East – let alone about execution there. The conference highlight for me was the Plenary Speaker, David Garland (the subject of another blog another time – but read his Peculiar Institution on the American death penalty).

Perhaps even rarer than hearing about the North East, funny given the conference setting, is someone talking about Scottish execution – so I thought I’d try to fill that gap this week. The conference was handily placed for a blog on Scottish punishment  as it was opposite the recently renovated Edinburgh Surgeons Hall – a key site in one of Scotland’s, if not Europe’s most famous criminal cases. The case I refer to is of course that of Dr Knox and the bodysnatchers Burke and Hare.

The details of the case are not the main focus of this blog, as I want to cover the execution, but in case you are new to it, here’s a very brief summary.

Dr Robert Knox was an eminent surgeon and anatomist in Edinburgh in the 1820’s. He was instrumental in the creation of both the museums of anatomy and pathology in the city and was renowned for his public lectures on the body. However, like all Surgeons of the period he suffered from a severe shortage of bodies available for instruction. Enter Burke and Hare.

To solve this problem Knox employed two Irishmen, William Burke and William Hare to help him illicitly procure extra bodies. Not satisfied with the well honed nefarious practice of grave robbing, Burke and Hare decided that they could just as easily do the work of mother nature by creating their own cadavers from the living. Mainly targeting prostitutes, vagrants and the most vulnerable residents of Edinburgh, the pair soon were making a great trade in bodies from a practice that later became known as ‘burking’ (murder, by suffocation). Testament to the infamy of the case can be seen in political cartoons of the time and the extent to which ‘burking’ became part of the lexicon.

Eventually both men were caught, but William Hare turned Kings Evidence against William Burke and escaped the gallows. William Burke however, was sentenced to execution in Edinburgh’s Lawnmarket. His execution and the reports thereof are unparralled with anything I have seen before, particularly with regards to the behaviour of the crowd.

Such was the intense anxiety of the public with regard to the execution of Burke, that, at a very early hour this morning, people from very remote distances came in crowds to the Lawnmarket. Never, we believe, was such an assemblage seen….What was appaling (sic), and yet most gratifying, the crowd assembled, which could  not be short of 30,000 souls, rent the air with shouts of exultation when the monster appeared on the scaffold; and the same cheers were renewed at every striking feature of the terrible tragedy

The visceral anger towards Burke is in no doubt, Take for instance this passage.

When the body was cut down (from the scaffold)…the most frightful yell we ever heard was raised by the indignant populace, who manifested the most eager desire to get the monster’s carcase within their clutches, to gratify their revenge.

Whilst attempts to recover the body were not uncommon, they were almost always motivated by an attempt to save the body from the additional punishment of dissection or gibbeting and to guarantee it a proper burial. In Burke’s case however, it appears that the crowd thought hanging was too good for him and had their own ideas about a suitable post-mortem punishment. The same report notes people at the front of the crowd carrying knives and scissors and making an extraordinary rush to the scaffold to get keepsakes of the rope and even shavings of his coffin. Again, these were not unheard of practices, but I have not seen them described in such vociferous terms before.

Regular readers will remember a few weeks ago that Burke didn’t suffer the gibbet. A fact that made Jobling’s gibbeting at Jarrow three years later all the more shocking. However, it appears the public were expecting that he would, as this report in the Newcastle Courant attests to.

As one among many proofs of the feeling of the public…we may notice the fact, that in anxious expectation of the gibbet being erected, a crowd of people assembled yesterday at the head of the Wynd…and remained there the whole day.

The site where Burke was hanged is marked by three brass bars in the pavement, the purported site of the scaffold and a plaque on the wall marking it as the site of the last public execution in Scotland (the subject of a previous blog). 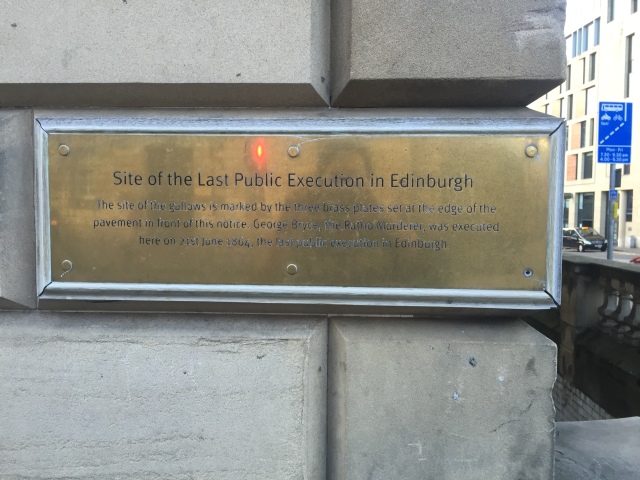 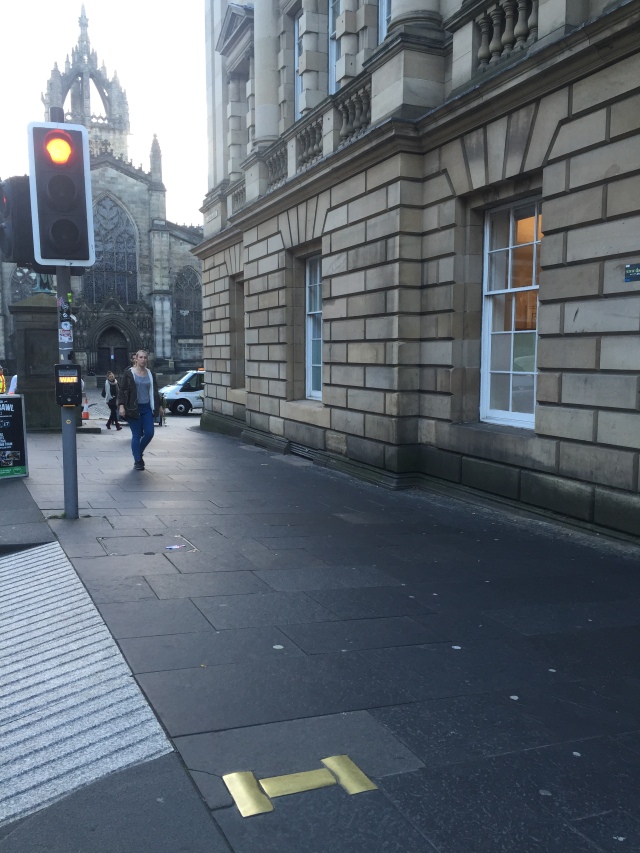 Perhaps rather fittingly, Burke ended up on the anatomists slab. Even more fittingly, his dissection was undertaken at Edinburgh’s Old College – the site of my conference.  To this day his skeleton and a book purported to be covered in his skin reside at Edinburgh’s Anatomy Museum.

There are so many great parts of Edinburgh, but I thought I’d put down a few of my favourites for anyone planning or who fancies a trip there. So, here they are in no particular order.

BEST: Glasshouse – I took my girlfriend for a weekend away here once and it’s a beautiful setting, just off the main streets, but built so that the rooms all back on to a garden with a view of the beautiful Carlton Hill from the bedrooms.

WORST: Backpackers hostel – being a total cheapskate when i travel alone, I booked this place and it was awful. It overlooks an alley with two of Edinburgh’s oldest late night pubs and so I was serenaded each night by the drunkest men I think I’ve ever seen. Plus the bedrooms were like cells – quite fitting for a Crime Historians Symposium I suppose.

Last week I showed you the bizarre ‘no selfies’ sign beside the tomb of Richard III and promised a blog on it at a later date. Well imagine my luck when I searched for what was on in Edinburgh and saw the National Portrait Gallery were doing a history of the selfie. It was a fascinating tour of over 400 years of self portraiture and the changing nature of self-representation. I have picked a few standout pieces, but you should really see it for yourself. I thought it was an ingenious way to engage new audiences with fantastic material and you could even have your photo taken and be part of a European wide group selfie (I declined -ever the miserable bastard). I remain unconvinced that the modern selfie has anything like the depth or insight behind it that some of these great works did, but it was a brilliant way to put it in its historical context.