The Body was then hoisted up and secured, and left as a warning for the future, and a memento of the past.

Well, it’s been a while and I can only apologise for my extended absence online. After two years of fairly consistent content I suddenly lost the urge to write and unlike the stoic Captain Oates, my leave came without warning – I knew not that I was about to disappear into the bleak wilderness of 3rd year PhD despair. In truth, the dawning realisation that every time I wrote on here was time I wasn’t writing my thesis, was enough to cause my blogging brain to atrophy. Apparently to become Dr.Low, I have to write 100,000 highly intelligible words around my subject choice and a blog is not part of that – If only I’d known this earlier!

So, what brought me back round to blogging? Believe it or not, it was some lovely academics in Leicester (of which more next week) and Osama Bin Laden. Yes, the one time bogeyman of Western Europe can add to his, already enormous, rap sheet the return of my blog and here’s why.

The quote that opened this blog was taken from a printed account of the execution and gibbeting of William Jobling, in 1832. Jobling’s case is perhaps the best known of all the executions in the North East in my period for several reasons; chief amongst them the way his body was treated after death. He was the final person in the North East of England to suffer the additional punishment of gibbeting, as prescribed by the 1752 Murder Act. In fact, his gibbeting sentence was the penultimate in the whole country, the last case of gibbeting happening mere weeks later in Leicester – the victim, one James Cook (can you guess what the “of which more next week” will relate too now!).

However, it is what happened to Jobling’s body after gibbeting that is the subject of this blog and where the Bin Laden link comes into focus.

The iron cage in which William Jobling’s body was encased hung from  an “oaken post”, some 21ft high. The structure was placed in Jarrow Slake, a body of water described in 1820 as

a ruined haven or bason, half filled by the wash of sand and soil, which still receives the water of Tyne at flood, and is left dry at the ebb.

As with most gibbets, Jobling’s was placed near or overlooking the scene of the crime. Contemporary reports state that it’s prominence on the landscape changed dependent on the tide, with up to 16ft-17ft of the structure visible at high water. It was not a common practice for gibbets to be placed in water and one can only assume it was to make any damage or attempt at recovery doubly difficult. In this state the body hung for nearly 4 weeks.

Now 4 weeks may sound like a long time for a decomposing body to be hanging in full public view, but at the time it was a very short period indeed. Gibbets had been known to stay for many years on the landscape. Indeed Winter’s Gibbet in Elsdon still stands today (albeit after myriad repairs, alterations and shorn of its original victim – for more on this see here). Similarly Robert Hazlett’s, the Gateshead Highwayman, survived for many years.

But just 3 weeks and 4 days after it was first placed in Jarrow Slake, the following notice appeared in a handbill, printed in Newcastle.

to our great surprise late last night (Friday, August 31, 1832) or early this morning (Saturday) both the body and Gibbet have totally disappeared, to the utmost relief of the inhabitants of the surrounding neighbourhood.

Mere weeks after it was placed in Jarrow Slake as “a warning for the future, and a memento of the past”, Jobling’s gibbet cage was stolen away. Never to be recovered. This in spite of the warnings from the sentencing Judge, printed threats in the regional newspapers and handbills, delivered in Jarrow and South Shields, stating that any attempt at recovery would land the guilty party with the punishment of transportation for 7 years. The whereabouts of Jobling’s final resting place has been the subject of heated local debate ever since.

Several rumoured accounts of his final resting place involved variations on a sea burial. The most notable instance of this account can be found in the reported “confession” of Jobling’s co-accused, Ralph Armstrong (a man never caught by the authorities despite the offer of an enormous financial reward for his recovery). The confession itself turned out to be a false one, made by an unknown sailor on board “his Majesty’s Ship Tribune” in Corfu in 1836. Jobling’s legacy far outlived his body though.

Jobling’s body was never recovered but the story doesn’t end there. His legacy has become a site of deeply contested meaning. Popularly remembered as a man wronged Jobling has become something of a local hero; the subject of ales, exhibitions and even an opera. In this narrative Ralph Armstrong is the guilty man and Jobling’s execution a miscarriage of justice, an argument whose merits I will debate another time. The surreptitious stealing of his body from the gibbet is testament to the power of the criminal corpse to be the site of multiple meanings that long outlive the original intention of the spectacle. Jobling, in this sense, is one of many cases in this period in which the punishment inadvertently made a martyr out of a malefactor.

Perhaps nowhere is the legacy of his case and others like his more apparent than in the burial of Bin Laden. It would appear that some US policy makers had heeded George Santayana’s aphorism that “those who cannot remember the past are condemned to repeat it.”[1] Or was it the “warning to the future” that opened this blog. Either way, realising the potential for his body to become “a shrine and a place of pilgrimage for his followers,”[2] a veil of secrecy covered the operation and little is known outside the limited details, all be it heavily redacted, that have emerged as a result of persistent Freedom of Information Acts.[3] Official reports claimed Bin Laden’s body was weighted down, placed on a wooden board and dropped off the USS Carl Vinson into an unspecified location in the Arabian Sea. Of the limited details that emerged it is notable that the ritual washing and shrouding of the body customary in Islamic tradition is said to have taken place.[4] In short every care was taken to stop Bin Laden’s body from becoming a site of contested meaning.

It would appear then that the US authorities were acting on a long line of history, in which the authorities had learnt of the power of the criminal corpse to counter the intended narrative of punishment. In spite of their efforts counter narratives regarding Bin Laden’s eventual place of rest abound. Several global news outlets suggesting his body was actually “torn to pieces” by rifle fire and thrown over the Hindu Kush.[5]

In a very real sense then Bin Laden joins a long line of criminals whose bodies were not silenced in death despite the best efforts of the state. As such his burial is further testament to the power of the criminal corpse and its tendency to become a site of deeply contested meaning. Much like the gallows the gibbet made a martyr of a malefactor and it was this, as much as it’s increasingly odious presence in the local landscape, that led to its removal from the state’s arsenal.

What is often overlooked though is what punishment replaced it. In both the Anatomy Act (1832) and the Hanging in Chains Act (1834), that removed dissection and gibbeting respectively, an alternative provision for the body was specified namely burial behind the prison wall. Perhaps Jobling’s “warning to the future” was actually to the state.

I’m sure I will have posted this before, but I’ve been writing a chapter on gibbeting and have been doing a lot of work on the case of Hazlett the Highwayman and this is constantly at the back of my mind. A cracking tune (one of the first vinyl picture discs I ever bought). I can’t vouch for the accuracy of the bands representation of the c18th highwayman, but if you are interested in finding out more then you can’t go far wrong with Andrea McKenzie’s excellent chapter on them in her equally brilliant Tyburn’s Martyrs.

One of the stranger things that drew me away from blogging was a new found love for woodwork. My girlfriend had bought me tools a year or so ago, in the vague hope I’d suddenly became an amazing DIYer. Up until this Summer the tools had stayed undisturbed. Suddenly though, I had a huge urge to make something – I think after 2 1/2 years on the same project the idea of starting and finishing something in a week was a very appealing thought. Anyway, as it stands we now have a bench, two potting tables and a whole new fence in the garden in a matter of weeks. Perhaps I’ll try a gibbet for the next task – could be the perfect warning for the neighbour’s cats. 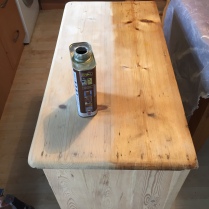 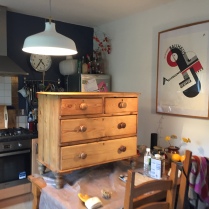 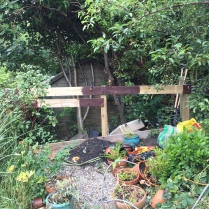 5 thoughts on “Jihadis, Jarrow and Justice Being Done”