Hadst thou robbed to support the c—n and murdered for the m—y, thou mightst have been yet alive. Were all the robbers of the nation hanging in the same situation, there would be some appearance of justice and impartiality. But the poor only, can commit crimes worthy of death,—and those also must be enemies to the c—–t, or lukewarm in its interests.

James Murray, The Travels of the Imagination; a True Journey from Newcastle to London in a Stage-Coach: With Observations upon the Metropolis. By J Ames M Urray (J. Bumpus, 1828), 31

Last week I detailed the crimes, trial and execution of the Gateshead ‘highwayman’ Robert Hazlett. He had the peculiar ignominy of being the first person to suffer the gibbet under the Murder Act 1752 in the North East. For regular readers of the blog, they will know that I have been tracking the sites of execution in the North East and so this week it is the turn of Hazlett’s gibbet.

At the end of last weeks’ entry, I mentioned that Hazlett’s execution is the subject of a particularly full record in contemporary North East historian, John Sykes’ Local Records. The same Sykes appears as Editor of an 1820’s poem by Lubin Level, detailing a new road to be built through Gateshead, which itself contains the following fascinating footnote.

Hazlett’s gibbet, or stob, as it was called, remained here many years after the body had disappeared. On the inclosure of the Fell, Hazlett’s pond (which was the name it retained from the circumstance of the gibbet), becoming the property of Michael Hall, Esq., that gentleman caused the pond to be drained and cultivated.”[1]

A cursory search for Michael Hall Esq added further detail as it took me to a fantastic work, I had encountered before, by Reverend James Murray (1773). Written about his travels from Newcastle to London in a stage coach, Murray provides a deeply evocative description of his passage past Hazlett’s gibbet.

The place where Hazlett hangs is the finest place in the world for the walk of a ghost. At the foot of a wild, romantic mountain, near the side of a small lake, are his remains. His shadow appears in the water, and suggests the idea of two malefactors. The imagination may easily conjure up his ghost.” Yes! the imagination is a great wonder-worker. But in the present day, when everybody -steams over Loch Lamond and rambles among ‘The Lakes’ the tourist will be disposed to smile over the “wild romantic mountain” and the “lake” on Gateshead Fell !

This haunting image of a dual gibbet is remarkable, but not quite as much as Murray’s description of the scene itself – the romanticism wildly at odds with other contemporary descriptions of the pit-pocked and slag-strewn landscape.

Murray thought Hazlett’s gibbet a pitiful and tragic spectacle and was in no doubt (as the opening quote of the blog makes apparent) that had he been richer he wouldn’t have suffered the same fate. Interestingly, Murray was to give Gateshead resident Thomas Bewick one of his first commissions, requesting an engraving of a “Theban Harp”[1] A figure to whom I will return anon.

As with Syke’s earlier footnotes, the 1828 edition of Murray’s travelogue carried a similarly interesting detail.

*On the division of Gateshead Fell, Mr. Michael Hall, who had the pond (Hazlett’s – my inclusion) as part of his allotment, drained it, and it is now a beautiful piece of green sward.

So, I set out on a search to find the exact site of Hazlett’s Gibbet and Michael Hall Esq was my lead. Numerous reports site Beacon Lough as the site of his gibbet. I knew Beacon Lough still existed today and was on a part of what is known as The Fell. However, given the descriptions of the Fell in the time of Hazlett, I didn’t hold out much hope of it being accurately mapped.

Gateshead Fell, as the name implies, was once a wild common, over a portion of which lay the road between Durham and Newcastle. The loneliness of the bleak moorland was quite guile enough to invest it with terror to travellers a hundred years ago and occasionally there were incidents that served greatly to enhance the evil repute of the locality 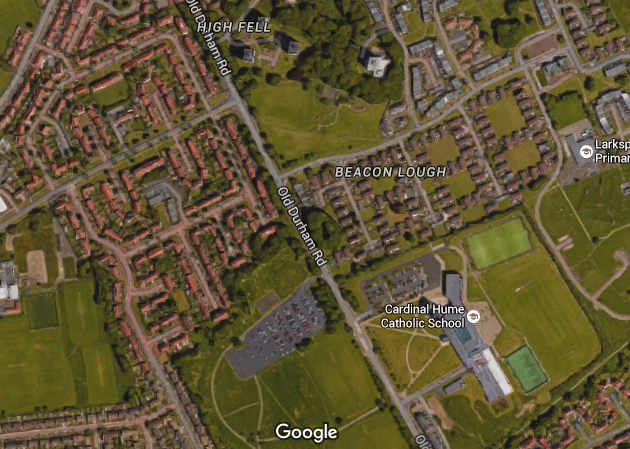 As with most of my Research, my first ports of call were Newcastle Library and then Tyne and Wear Archives. I always hope that what I want is in Central library, as Tyne and Wear charge £10 a day to take any photos and £1 to plug your laptop in – I blog for them and don’t even get a discount! (rant over – I love you really!). As is often the case, though, the best stuff is at Tyne and Wear.

I spent an entire day seeking out obscure maps of Low Fell and surrounding areas and seemed to be getting nowhere. Most of the maps of the period were focused heavily on Newcastle with Gateshead an afterthought, and the region south of Gateshead barely registering, as in this 1788 Map by J.Bielby.

But then, just as I was debating going for a tea and a Twix (vital sustenance for the elderly and researchers) I struck on the following entry.

It’s a funny old business archival research, you can spend forever ordering up documents that seem destined to have what you want and that then couldn’t be further from what you imagined, appearing in all shapes and sizes, and invariably meaning nothing to you. But, just when all seems lost, something usually unexpectedly surprises you. See if you can spot what made me so happy.

Did you spot it? ‘Hazlet’s Pond’! Congratulations if you did. If not then just look below and to the left of “Beacon Hill” marked at the top of the map. The very same pond that the Reverend Murray passed in 1773 and noted the double spectre of Hazlett’s gibbet reflected in the water.

Having located it, I then started to delve into later maps to see when the land became divided and soon came upon the 1809 Enclosure Act.

Enclosure Acts meant that land, which had often been used since medieval times as common land, was enclosed and allotted or sold to individual owners.

literally covered with hillocks of refuse coal or pit heaps with a few rambling briars and whins, barely affording a living to a few tinkers and cloggers.

Soon changed dramatically. The aforementioned Thomas Bewick was one of the people who decided to move there. He had “gazed” at the site for “years” from across the Tyne in Newcastle and the new influx of professionals, such as himself, ultimately “ended the vagabond culture” of the Fell, although Bewick biographer Jenny Uglow claims it,

Still had a distinctive character, the wildness of the fell offset by nursery gardens and estates.

With the Enclosure Act in mind, I started to look at later property division maps in the area and lo and behold I came across this.

For the eagle eyed you will see, in the top third, “Michael Hall X Allotment” straddling both sides of the Durham Turnpike Road. There are 15 all told. When aligned with the earlier 1805 map, Hazlett’s pond would sit somewhere between the first and fourth allotment on the right-hand side of the turnpike road.

So there it was, Michael Hall’s land, one mystery solved. Now to find what it had become. Satisfied, I had enough to start searching, I set off to find what remained. To which I will turn next week.

As I retraced my steps and trudged home, I passed this on my way out of Gateshead. The site of the house in which Thomas Bewick died and guess what replaced it…..a Post Office [2] – I wonder what Hazlett, the robber of the Mail, would’ve made of that!

After plugging BBC documentaries last week, I thought I’d steer away from TV but two great new BBC dramas have emerged (One an American Production by FX). I have a terrible tendency to decide within five minutes whether a TV drama is any good, there’s something about the look and feel that means you just know straight away whether you’re in safe hands or not. If you want a good example of when something doesn’t quite work just watch ITV’s Beowulf (gutting to say, as it’s filmed up here and we’re desperate for big productions up here). Luckily, The People vs OJ Simpson and The Night Manager both live up to expectations. In the case of OJ Simpson, the central performances are great, Cuba Gooding Junior beautifully captures a man in a state of total mental imbalance and David Schwimmer is a brilliant sidekick to him as Robert Kardashian.

My second recommendation is  The Night Manager, I suspect that not having read the novel, on which it was based, helped my appreciation of it. I have seen from reviews that key locations and characters have been changed which, if handled badly, is often the kiss of death for TV adaptations.  I felt as a standalone drama it was slick and gripping and, far more impressively, it made me start to like Tom Hiddlestone – a minor miracle. As for Hugh Laurie as a bad guy, I couldn’t see it working from the trailer, but he won me round – there will always be a part of me that can’t see Hugh Laurie as anything other than the guy who made me howl with Laughter with sketches like this. I imagine this on an infinite loop everytime I hear Donald Trump speak.