There were many things I had thought may happen when presenting at my first international conference, but being upstaged by Charles Dickens was not one of them. It turns out, that however much you tweak a paper to make it engaging and funny, someone having found Dickens’ own (long deemed lost) lushly bound and, more importantly, personally annotated copies of All The Year Round is more impressive than a talk on Newcastle’s Phrenological past. Or at least the national press think so!

Sadly the broadsheets have yet to contact me about my paper, I have been sat by the phone for days. I was fortunate enough to be on a panel with an eye-catching title ‘Sex, Death and Violence’ and so we had a guaranteed large audience even though we were the very last speakers of a long two-day conference. The panel was chaired by Dr Andrew King, a brilliant and convivial host who was very friendly and the perfect person for a first timer. I’m particularly grateful to him as he offered me some really useful feedback on a piece of information I presented in my paper and had the good grace to wait till after in private, so as not to flag up my shameful ignorance!

My fellow panelists were also great. Dr. Bob Nicholson (Edge Hill University), was one of the best presenters I’ve seen since I started my PhD. It’s a rare skill to be funny, deeply engaging and academically rigorous but he managed it and even managed to make Powerpoint look like a fantastic medium (he informs me it is, so I will now have to up my game and learn it fully). Bob’s talk was on the “Worst Newspaper in England” (The Illustrated Police News). It’s towards the end of my period but it’s an astonishing publication. It’s packed to the gills with tales of criminal activity, graphically violent illustrations and salacious headlines – included “burglarious elephants.” If you have access to the British Newspaper Archive or another online repository it’s well worth a look.

All said and done the conference was a great experience and the beautiful surroundings topped it off nicely. My personal highlights were from the more obscure talks. Two in particular spring to mind. The first was by Maria Damkjær (University of Copenhagen) and was on umbrellas and their appearance in the periodical press, more specifically how they were often described as having a life of their own. It was the perfect model of an academic talk, light, engaging and underpinned by great research and knowledge. Similarly, a talk by Dr Ian Hesketh (University of Queensland, Western Australia) on Ecce Homo a fictional retelling of the life of Christ, first published anonymously in 1865. The talk detailed how the controversial subject of the book coupled with the fact its author was anonymous made it fantastically popular. People were desperate to reveal the mystery author (eventually named as J.R.Seeley – although he never fully claimed authorship). What was interesting was how much the publishers stirred the controversy and in one particularly neat twist, even invited people to dinner with the author. When they arrived they were told the author was there amongst them, but not who he was. Genius.

One of the nice things about conferences is meeting the human behind the talks (it takes a while for academics to drop their guard – I find drink helps and RSVP were very generous with that). Some of the people mentioned above were amongst those whom I got to know personally. I spent a good half an hour over a beer discussing an infamous ice hockey incident with Dr Hesketh (I should mention I know nothing about ice hockey, but lived in Canada for a year when the incident was all over the news. Dr Hesketh is Canadian and therefore can’t not like ice hockey – it’d be like a Brit hating tea).

In terms of Belgium itself, I managed to get to Bruges, Ghent and Brussels and they all have their charms. I particularly liked the Belgian people, dry humoured, friendly and admirably laid back (although when you’re waiting to be served that can be slightly frustrating). While Belgium has its critics, particularly Bruges – some deride it as a ‘disneyfied’ city in which architectural conservatism has led it to becoming a country preserved in aspic, I didn’t buy that; Not least because of the lack of uniformity in the buildings. On most streets you would find houses of all different sizes, shapes and hues sitting side by side and it made every corner you turn a new and exciting experience. In Bruges we stumbled on the Trienalle of Contemporary Art and Architecture and much of the work was in big public spaces and railing against the conservative architecture of Bruges. Indicative of this sentiment and perhaps most visually striking was T Romy Achituv’s Cataract Gorge (see below), described as follows.

Floating on the turbulent waters is a structure in the form of a Gothic crow-stepped gable house. The work refers both to the city’s economic heyday hundreds of years ago and to the current stagnation of a city that seems to exist solely for the purpose of entertaining tourists. Strict regulations intended to preserve the city’s heritage act as brakes to evolution and a dynamic future.

I couldn’t help thinking the unfinished nature of the building ruined the intended effect, a frontage as ornate as any Belgian house would’ve hit home harder (but then what do I know, I had glibly guessed that it was a piece railing against global warming anyway). I’ll stick to executions!

I also managed to get a good initiation into the complex world of Belgian Beer, thanks to Michael Knies (Special Collections Librarian at the University of Scranton – for any US Office fans, he’s an expert in print, amongst other things, and in Scranton!). While i’m pretty up on my ales, I had no idea how many varieties of beers there were to be had and was staggered by the strength of some.

So, all in all it was a great success and I am immensely grateful to RSVP for accepting my abstract and to Sunderland University for their financial support, without which the trip would’ve been impossible. In the interests of balance though, I feel, (being British) I should make at least one complaint, so here goes. I am far better at picking accommodation than conference organisers.

Bear with me! I’m convinced that the quality of a university can be judged on the graffiti in the toilets. Much in the same way as a pub. Given this, I was very pleased to be greeted by this gem in the Ghent University cubicles. Surely a sign that I was in an institution of high regard. 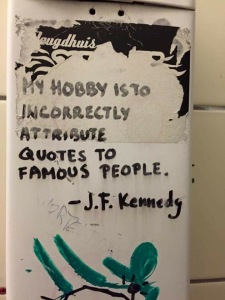 The theory also works for pubs. There is a fantastic pub in Newcastle’s Ouseburn called the Free Trade and it’s worth a visit for the gents toilet graffiti alone.

Whilst my talk may not have been the most impressive of the conference, I did have one thing that outdid everyone else – I was performing simultaneously in two countries at once. Whilst I was giving my talk, my comedy group Hot Gulp were also hosting and taking part in a live lip synch battle at the Cumberland Arms pub. For the uninitiated (i was too as of about two weeks ago) lip synch battles are basically comedy/karaoke where two people battle it out to do the funniest version of a famous song. One particularly memorable effort is Stephen Merchant (Co-Creator of the Office) doing Christina Aguilera’s Dirty.

Luckily our effort was less mentally scaring. We performed Paul McCartney’s Live and Let Die, with myself ‘live’ on Skype. Sadly I can’t put the video up as it isn’t on Youtube, but it was really pleasing seeing how well it went and particularly when the audience realised at the end that I wasn’t really there (filmed secretly two days before the conference in an unknown location – felt that was fitting for Bond).