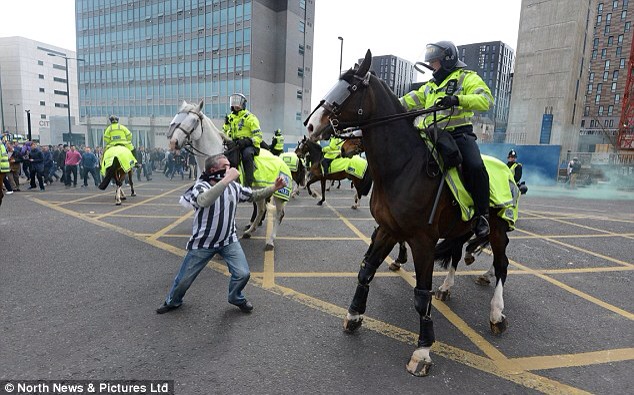 For anyone who missed last weeks blog, I was facing my first official PhD review. It took place on Thursday 4th and was every bit as initially nerve wracking as I thought it would be.

However, after the initial trepidation, when it got underway I realised I was really enjoying it. My personal highlight was managing to include the phrases ‘mediated publicness’ and a version of the following “in many ways the eighteenth century execution crowd was not hugely dissimilar to the horse punching football crowd of today.”

My only fear is that I got a bit of a taste for presentation. Having spent my whole life thinking how much I’d hate to be a teacher I did have a fleeting moment where I realised I was enjoying talking at the front of a class with people interested in the subject. Then I remembered that in real classrooms no-one is interested and I am nowhere near clever enough or brave enough to lecture on a subject, so I  swiftly burst that balloon.

If I’m being honest I think the enjoyment came mainly because it was the first exam situation I’ve ever entered having done a decent amount of work. When I think of how laxly I approached my undergrad exams all those years ago, I’m amazed I even got a degree. I can honestly say i’ve done more work in four months than I did in 3 years as a BA student back in the heady days of the new millenium.

Having spent the last four months holed up at home or in libraries with only my thoughts for company and the occasional kind friend or partner who’ll listen to my ramblings, the opportunity to present ideas and argue my case was really liberating. Not to mention the chance to have four experts from very different fields giving me their advice and opinions. Knowing that they will have gone through the process themselves is very reassuring. Their input was really helpful and makes you question areas you hadn’t thought of.

The process of review also reminds you how much you and your ideas have changed in such a short space of time. When I first submitted to do a PhD back in February, the application was focused entirely around the last dying words of the executed of the North East. This has now, due to the initial scoping I have done, changed greatly. While it is still a facet of what i’m looking at, my PhD is now focusing far more closely on execution itself and the experience of it in the North East. In that respect the title has changed to the following.

Privacy, Punishment and the Press: A Study of Capital Punishment in the North East 1750-1880.

That’s the beauty of a PhD, you have the ability to, and should, adapt to changing circumstances. Sources, research and new questions lead you into avenues you could never have imagined on beginning the research. As such the project feels very much like a piece of sculpture, something that has started as a rough lifeless block and over many rounds of honing is slowly taking shape and hopefully turning into something of beauty and value.

So, the review has been passed, I can now return to what is far more interesting for me and for the readers of this blog. Death, Dying and Execution. See you next week.

Having support during a PhD is vital and one of the key elements in reviews is that your supervisor is there for these review meetings to handle any questions you can’t. Unfortunately, mine was unwell on the day and so I was flying solo, I hope he is better soon. In his absence, I wanted to say a special thank you to Lynne Fenwick who is part of the fantastic Sunderland University Graduate Support Team. She was able to answer all my panicked questions in the build up and has been a great resource and support already in this early period of my studies. So, thank you Lynne.

Distraction 2: Future Islands and Carlton Banks
When I get the chance, on a night out or at a wedding I love dancing. That doesn’t mean I’m good, but I do love it. It’s more like an urge, the same sort of urge that children under 5 get at weddings, when they see a perfectly shiny floor to skid on their knees across. This combination of passion and limited ability mean my moves are slightly unorthodox and often distressing, particularly for my girlfriend. So, this week I came across two great examples of unorthodox dancing and thought i’d share them. The former is how I think I dance in my head and the later is closer to how I know I dance. Both are great!

One thought on “Presentations, mediated publicness and horse punching”